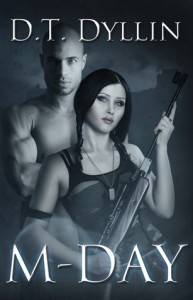 On December 21st men the world over woke up changed by a virus. Ice blue eyes and a primal savage personality were the norm for them and women everywhere were being brutalized, enslaved or outright killed. Maxine woke up to a completely different Ricki, one who raped and bit her. When he left her alone, she ran from her husband and no matter where she went he seemed to find her though she managed to stay just out of his reach. Hooking up with other women they find moderate safety in numbers, but it’s a temporary fix. Ricki will never stop until he has her in his control. It’s kill or be killed and Max isn’t sure she can lop off the head of the man she loved. When she meets Zee, a man who is only partially infected, the last thing she’s looking for is hot sex with a stranger, but it’s all she can think about when she’s around him. Or even when he’s not there. She has enough on her plate already without getting it on with one of the few men who doesn’t appear to be infected, but how do you say no to raging hormones?

This is an interesting twist on the zombie apocalypse in that instead of mindless brain eating zombies of both sexes this virus only affects men who act as if they’ve gotten amped up on steroids or something. They heal quick, have super strength, senses and speed and most have been reduced to mere primal instinct with little logical thinking or planning. When Max and her friends find out there are actually men who aren’t infected they can’t believe it. A scientist in a military compound with the other non-infected is trying desperately to find a cure, but before he can do that the compound is attacked and they must flee.

It’s a great concept and this story would have been wonderful if it wasn’t so choppily written. It also needs further editing. Trim a bit here, shade some there, embellish a bit and fix some errors and you’ve got a top notch hot paranormal read. The sexy steaminess is wonderful though. I could really feel the heat between Zee and Max. Woo doggie! *fans self* Beware though, there is some brutality in this and some readers may find it to be too much. In addition there is some gruesome head lopping. It didn’t bother me, but I’m just sayin’. All-in-all I enjoyed this tale and would definitely read more about this strange new world.