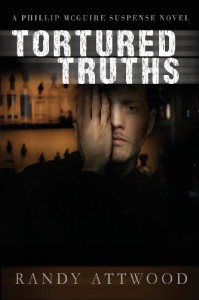 Philip McGuire is a jaded, cynical and burnt-out journalist that gets captured by the Hezbollah. Under torture he reveals his knowledge of the Marine compound in Beirut and after they bomb it, killing 237 Marines, they let him go. After getting extensive treatment and rehab on his tortured hand, Philip heads back to the States. Deciding to get out of journalism for good he heads back to his college town to open a bar and hopefully heal inside and out. But just as he’s feeling nearly normal again, trouble pops up and his instincts tell him there’s more to the story than is seen on the surface. Can he figure it out without his past haunting him?

The book begins in 1983 and it took me a bit to get my head wrapped around the Marine compound bombing, Reagan as President and everything that went with the 80s. I typically don’t read history this fresh.  When I do step into a bygone era I prefer the far distant past. However, once I got into the right mindset I was off and running.

Philip is a pretty good character to follow around. His mind is interesting and since he’s been a journalist for years he’s fairly knowledgeable. The torture itself is not on page. The story begins right after and how he deals with his mutilated hand, the surgeries and rehab. Then his quest to open a bar and the renovations are all interesting. Then shit gets real with killings in his new/old town. When someone he knows is killed he can’t help but dig into the reason why. Along the way he finds a lovely brash lady, meets old and new friends, builds a business and, most importantly, faces his past. The story is not a fast-paced thriller, but is a slow build, one brick at a time, providing a solid story with a solid character. I would definitely read more about Philip and all of his friends.