A different twist on Immortals 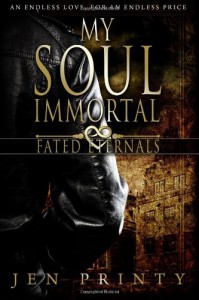 Jack Hammond has been around for 170 years. He can’t die. After his true love succumbed to an illness he tried many ways to end his existence and none of them worked. So, every few years he moves around to keep people from being suspicious of his 20-yr-old looking face. However, when a liquor store robbery in LA goes wrong, Jack is shot twice with fatal wounds. He knows he has to skedaddle or face questions he can’t afford to answer without the risk of ending up in a straight jacket or a test laboratory. Ending up in Portland, Maine turns out to be the best move he’s made in his long life though it doesn’t seem so at the time. Who the hell is the mysterious stranger who calls himself Artagan and seems to know all about Jack? Also, running into his long lost love’s doppelganger throws Jack for a loop and he doesn’t know if he’s coming or going. Should he stay away from Leah Winters for his sanity’s sake or is it already too late? Jack has gone from a fairly monotonous life to one that is almost too exciting. Well, we know it won’t kill him. Or will it?

This is quite an interesting take on immortality. I was expecting a new trend on vampires or some kind of new fangled twist on Highlander, but this story goes in a much different direction than I was expecting and it revolves around Artagan.

I have to admit that in the beginning I thought Jack was a bit of a whiner baby. “Oh, my love died and I don’t want to go on without her, but I can’t die, so wtf? I guess I’ll just mope around for 170 years and do nothing with myself.” Ok, I get that it’s different, that Jack hates being an immortal. Not everyone wants to live forever. But 170 years of that crap? Come on, Jack! Pull up your big boy jockeys and do some interesting shit. But don’t worry, dear readers! He does after he meets the mysterious Artagan and Leah, the spitting image of his love Lydia. *That’s* when things get interesting! There is resolution to this story, but the gauntlet for the next book is definitely thrown down. I’m looking forward to seeing where this series is headed!