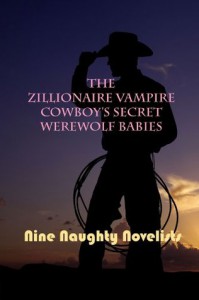 *Book source ~ Picked up for free on Amazon.

Rock Fangsworthy is a vampire, a zillionaire and a cowboy who owns The Double Fang ranch in Bloodsuck Texas. He’s also a daddy to twins though that’s something he doesn’t know. Yet.

Buffy Van Pelt is Rock’s neighbor and has inherited The Best Little Winery in Bloodsuck. She’s also a werewolf and broke. If she can’t pull the winery up by it’s grape vines she and her twins will starve or be forced to sell to Rock. Neither option is pleasant.

Rock and Buffy once shared some hot times together. Will they be able to put the past behind them and come together as a family? Or will an inept vampire slayer nip any happiness they may create in the bud before it gets a chance to bloom?

The title alone drew me in and I picked it up for free awhile ago. Then I needed the ‘Z’ for an alphabet challenge, so I figured it was high time I cracked this bad boy open. Oh.My.Lawd. Bless the authors’ hearts for creating an entertaining read. Nine authors took turns writing a parody about the book community’s current infatuation with cowboys, vampires, werewolves and billionaires. Though they made Rock a zillionaire which is even funnier. The writing is hilarious because it’s so exaggerated. They put everything a writer shouldn’t do in this and made it highly amusing. I had many moments of snorts, giggles, snickers and outright guffaws. If you need a pickmeup I suggest picking this one up.