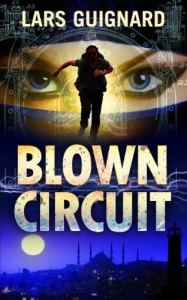 Michael Chase is a reluctant spy for the CIA. All he wants is to find his dad, but trying to locate him in China turned into a whole other mission that he barely survived. Now, credible intel puts his dad in Turkey, so Michael heads there with hopes of finally finding him. Instead, he comes up empty except for a few obscure clues and yet another mission to save the world from bad things. Will he survive this time, too? And will he finally find his father?

This is an exciting scavenger hunt and a race to find the pieces to the Tesla device  before the bad guys do. The race is heart pounding, the clues mysterious and Michael has no idea who to trust. It’s an enjoyable thrilling ride. However…Michael is just too knowledgeable about everything. He knows every kind of weapon, boat, ship, vehicle, helicopter and just about every fact from ancient history to the present in every subject under the sun. Ok, maybe he doesn’t know everything, but it sure seems that way. It gets to be tedious listening when everything is explained in painstaking detail and it slows the pace of the story down. Also, for a rookie agent he has an incredible amount of good luck. Now, some people are just that way, lucky in most things they do. But I find it hard to believe that the bad guys are such terrible shots. Did they learn from the A-Team or the Storm Trooper School of Firearms? Just sayin’. All-in-all though this thriller has a decent plot and several twists to keep the reader guessing.

The narration for this story is pretty good except for a tendency of the narrator to sometimes drag out the end of a sentence. It sounded weird. Other than that I give the narration a thumbs up.