Plenty of heat, but a clean fantasy romance. Well done! 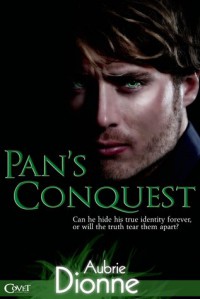 Syliva Rain owns the flower shop Sylvia’s Creations and she’s not doing too badly considering she’s Syrinx, a goddess imitating a human and living without using her powers. When she gets an order for 500 roses for an important client and he invites her to the house to take measurements, she and her assistant Kaye go to meet this rich mysterious man. However, when Syrinx meets Parker Thomas she’s attracted to him and that’s not good for the goddess of chastity. After all, hadn’t she fled to the 21st century to escape the attentions of Pan, the god of fertility, to protect what she held most dear? If she could resist giving in to Pan then she could certainly resist a mere human. She doesn’t realize though that Parker Thomas is actually Pan, come to the human realm in pursuit of the one who got away. And Pan doesn’t know that in his pursuit, he will face some hard truths about himself. What happens when an irresistible force meets an immovable object? Looks like we’re about to find out.

This is a great read. The writing is wonderful and the characters seem to just step right off the page. It made my office seem a bit crowded, but it was worth it. I loved Syrinx, but Pan is the one who stole my heart. At first, he was a bit of a jerk. He is just interested in getting laid. I know he’s the god of fertility and all that, but it just made him seem kinda sleazy. When he goes human and interacts with his butler Rutherford and then later when Syrinx talks about her ‘stalker’ (Pan) that’s when he starts seeing himself in a different light and he doesn’t particularly like what he sees. He grows as a character and that makes him wonderful. My only complaint is that I really didn’t get who Rutherford was and why he felt Pan, er, Parker Thomas needed him or how he even knew. I even thought he might have been a god in disguise, but that didn’t pan out. Hehe I said pan. Anyway, this is an excellent boy-chases-girl story with wonderful characters and mythology added for extra spice.