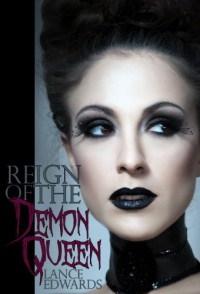 Gerald encounters Reyna at a Halloween party thrown by his relatively new boss. Gerald is a shy outsider looking in and he goes to the party in the hopes he’ll make friends with coworkers and maybe start to fit in. However, while there he sees Reyna and becomes obsessed with her beauty and terrific body. He’s disgusted with himself for not growing a set of balls and just going over to say hello, so he decides to leave. But before he manages to slink away Reyna corners him in the laundry room and proceeds to blow…his mind. Discovering a submissive and masochist side he never knew he had he agrees to follow Reyna and be her slave. He’s willing to serve, but will he survive?

Wow. This is a hard book for me to rate. It’s very well-written with an exceptionally inventive story. It’s so descriptive I had no problem picturing it in my mind. And thus my problem appears. I love to read BDSM and I even love sadistic stories, but only up to a certain point. The torture in this story is brutal. If Reyna hadn’t been a demon supplementing Gerald’s life with potions and magic he would have died from the many abuses she rained down upon him. I cringed repeatedly throughout the book. And yet, it is a great story. See my problem?

So, while it is an excellently written story and Gerald is a great character (it’s told from his POV, so I got to know him really well) the brutality just wasn’t for me. It won’t stop me from reading more by Lance Edwards though. I look forward to exploring more of his work.