Layer upon layer, this serial is building 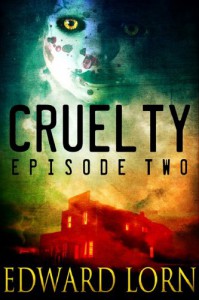 Cruelty Episode Two picks up right after Episode One left off. This is a serial after all. This episode contains more about the people who have been forced into Cruelty’s path either directly or indirectly, so we revisit old friends and gain some new ones.

Turtle is the meth addicted boyfriend of Jennifer the prostitute of Episode One. The description of his addiction is…frightening. But he is only a stepping stone for more characters, Twon and Ollie who are the ones behind the meth operation in the area.

Kirk is Will’s roomie and seriously addicted to working out. He can thank Turtle for sending Twon and Ollie his way.

Will has so many questions to answer when the police show up at the gas station where he dialed 911. The investigation of the seriously fucked up shit that has gone down this night is only beginning and we’re introduced to Sheriff Randy Miser, Deputy Nick Wuncell, Trooper Natalie Holden and State Investigator Frank Marcum.

Innis is in a nightmare, both waking and sleeping. Sweet Baby Jane! And we get Cruelty’s skin crawling POV as well. *shudders*

The book ends on Merlo’s POV and I’m beginning to wonder what role the dog is going to play in this tale.

Another well-written episode and Lorn is really layering an excellent story here. Having several POVs to follow gives me a chance to see and hear how other characters/players are connected in this seriously fucked up story about a baby doll serial killer. Again, I’m not very freaked out about Cruelty’s appearance, but being in its mind? Oh yeah…makes my skin crawl. Bring on Episode Three!