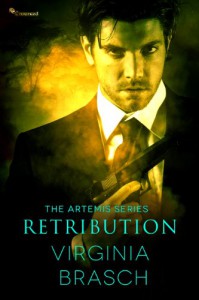 Bailey Russell is an operative for the Artemis Agency. A privately funded group who makes sure justice is handed out to those who would slip away and hide to avoid their punishment. Bailey’s partner was killed right in front of her by an arms dealer named Amir Fahad then she was sent back with the message: No one touches Amir Fahad. Unfortunately for Fahad, Bailey isn’t about to let that message stop her from dispensing retribution. One way or another, only one of them would be walking away.

Ben Ambrose is an undercover MI6 agent and has been with Fahad’s organization for three months. Until the day he blows his cover for Bailey and her team who have been targeted by Fahad through leaked information from inside the Artemis Agency. Forced to trust each other they go on the run toward Fahad’s stronghold. Would either of them survive this totally screwed up mission?

The plot is fast-paced and the writing is great. The characters are well-developed and I couldn’t help but cheer them on to victory though at times it didn’t seem they were ever going to make their target. The relationship that develops between Bailey and Ben seems a bit forced, but overall it’s a good one. My only other complaint is that the insider leak was never revealed. Unless I completely missed it, but I read the ending twice just to see if I had. I have my suspicions, but if I’m right then I will be completely disappointed in the dumbassedness of it. So I prefer to sit in ignorance. I like it better that way.