Fate ~ What a tangled web 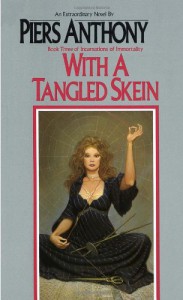 Niobe is 21 and her father finally puts his foot down and arranges a marriage for her to 16-yr-old Cedric Kaftan. No matter how much she cries and argues her father doesn’t waver in his stance, so she ends up married to Cedric. After a rocky beginning they make a go of the marriage before Cedric is shot and killed. Niobe finds out that Cedric had taken the bullet meant for her due to an evil plan of Satan. Satan should have left things alone because now Niobe is out for revenge. Even if she has to assume an aspect of Fate she intends to make the Devil pay for taking away the man she loved.

Niobe’s life is certainly an interesting one. From her marriage to Cedric to her role as Clothos and beyond, she has a definite link to a woman who will foil Satan’s ultimate plan. No wonder he tried to take her out when she was younger. However, if he hadn’t tried to have her killed then her husband wouldn’t have taken her place and she wouldn’t have assumed the office of Clothos. Oh, what a tangled web he tries to weave…and weaving is the province of Fate. He should have just left it all alone.

This story is interesting from beginning to end and Niobe has a long long life. I did get a bit confused at the end when she has to navigate the maze, but that didn’t stop my enjoyment of the book on the whole. I can’t say any more without giving away key plot points, but I can say it’s not a dull moment. I love seeing all of the Incarnations coming together to foil Satan’s Big Plan. I’m looking forward to revisiting Book 4 which is about Mars.