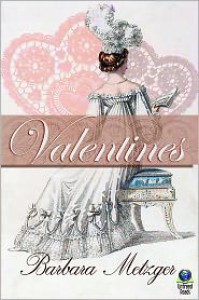 Three long time friends are sitting around their club getting drunk because they each have a problem that is getting them down. The viscount believes his wife is having an affair, the baron is seriously in debt and the earl is suffering the most horrible of all fates. Well, to a virile single man in his early 30s anyway. The decision is made to go to the country and hold a Valentine’s Ball, hopefully solving everyone’s problems in one fell swoop. And that’s when the fun begins.

Martine has been exiled by her father for a youthful mistake. Her life is pretty miserable, but she tries not to let it get her down. She has made friends in the small village and is always willing to help the vicarage with the children and the poor. Then one week before Valentine’s Day she receives an anonymous note on the door knocker. Who is this man? Is he the one who left her disgraced and exiled? Can she forgive him for the last four years? Martine isn’t sure, but his heartfelt notes each morning have her heart fluttering once again. What will happen when he shows himself on Valentine’s Day?

Senta is in the middle of her wedding night when she spots a ghost. Her new husband, Viscount Maitland, believes he is the cause of her screams and he leaves the room. Soon after, believing his new wife only married him for his title and wealth he goes off to London to pout. Well, he’s also is trying to find a blackmailer, but mostly he’s pouting, leaving Senta alone in the country with a ghost who has amnesia. The mystery surrounding Maitland’s brother’s death is the cause of the blackmail and Senta, along with a motley entourage, descends on her husband in London intent on helping him solve the problem and consummate their marriage. Because she loves the idiot and by golly she won’t allow him to file for an annulment if she has anything to say about it.