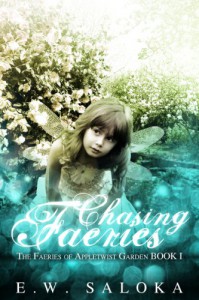 Calla Rose stays with her Grandma Cordelia every summer and every summer is filled with gardening, baking, fun and stories of faeries. She has friends to play with and the summer of her tenth birthday a new family moves in nearby and Calla Rose and Dylan become friends. This summer, right before her tenth birthday, she discovers that her grandmother’s faeries are real, but she thinks her grandmother doesn’t believe her when Calla tells her she’s talked to the faeries and the enchanted creatures in the garden. However, Calla couldn’t be more wrong. Not only does her grandmother believe her, but she’s worried that Calla has discovered the faeries too soon. What is a grandmother to do?

This is a charming middle grade story about a 10-year-old precocious girl who has the best summers ever with her loving grandmother. Her grandmother loves to tell her stories about the faeries in the garden and one day Calla decides she wants to look for those faeries. She doesn’t see them for awhile, but then one morning, she does. And after that the creatures in the garden talk to her. Calla Rose is a delight to read and I wish my grandmother had been more like Calla’s. If you know a middle-grader who loves stories about faeries then this is the one to get. Be warned though, it does have a bit of a cliffhanger and I don’t see when the next book will be released.