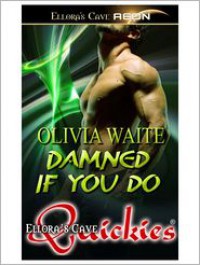 Lord Lambourne, Benjamin Davis, is dead and in Hell. He’s been damned for the sin of lust, a lot of lust, and after a year facing every torment he thought possible he’s been assigned to the luscious demoness Idared for more punishment. Idared has just been promoted from Great Marshal to Knight. Such a promotion in Hell is rare. Idared’s hard work and unparalleled skill with the whip have paid off and now, instead of torturing a group at a time, she has the charge of one person, Benjamin. However, the heat between them has nothing to do with Hell itself and everything to do with lust. Can they do something about it without disturbing the balance of Benjamin’s sin and not get caught? Is the risk worth it?

This is an outstanding well-written short with fully fleshed characters and the world of Hell is described so well I could practically feel the heat. The steamy scenes are exceptionally hot without being overly graphic. The tension of getting caught runs as a delicious undercurrent and when the summons from Lucifer comes it elicits dread that they were discovered. However, the summons isn’t what they think and the twist is surprising. This is the first story I’ve read by Olivia Waite, but it will most definitely not be my last.