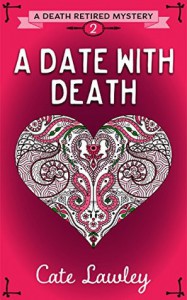 Book source ~ Review copy. My review is voluntary and honest.

Geoff Todd is retired. Ok, so he was a soul collector. It’s still a job, right? And he retired though he still has one foot still in the magical world, so to speak. He had no idea when he picked a community to retire to that it would be thick with magical people. He’s mostly mortal, but he retains a little bit of magic. He also shares his home with an unusual cat. Clarence is a huge pain in his ass, but he’s been asked to keep an eye on him and they are slowly coming to terms with their co-habitation. Then there’s Sylive. Ah, Sylvie. Geoff really likes her, but he’s from the 1940s and is clueless about nearly all things modern. Including dating. That leaves Clarence to give him dating advice. What could go wrong? Scratch that.

This is a great quick read with lots of paranormal goodness, a talking smartass cat, other magical people and creatures, and a budding romance. Oh, and ghosts. Geoff and Sylvie’s first date does not go as he planned. Not in any way. But what did he expect when he’s surrounded by magic and sometimes mayhem? It’s been a couple of years since this story so I’m not sure if this series is going to continue, but I hope it does. I’m looking forward to more.