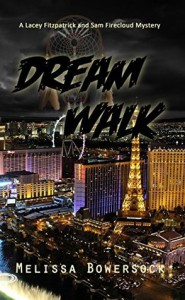 Lacey Fitzpatrick and Sam Firecloud have formed an unusual but satisfying partnership. Formerly of the LAPD and currently a private investigator, Lacey helps Sam, a medium, release ghosts from their Earthly prison. She does all the research and Sam does his ghost walk. Usually the dead don’t come to him. His usual work mode is that he gets a call and if there is a ghost present he does what he can to help it along. This time, his cousin comes to him and Lacey and Sam need to head to Vegas to find his cousin’s body and the person or people who murdered him. But Vegas is a big place and the people who were after his cousin are now after Lacey and Sam. They gotta hurry before they’re one of the things that stays in Vegas. Permanently.

I’m really loving this series. Each book is a quick read with a great mystery to unravel. They’re also pretty well self-contained so you don’t really need to read the books before to get in the groove. But why would you do that?! This story has an added perk of danger Will Robinson, danger! Sam’s cousin was not on a very good path and now that he’s dead the baddies are after the two nosey people snooping around Vegas. Woo! I was on the edge of my seat for this one! I’m certainly looking forward to the next book.