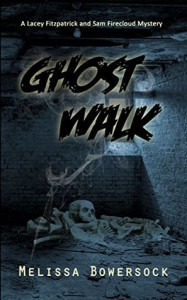 Lacey Fitzpatrick works as a security guard for a self-storage place because her ex-boyfriend was a dirty Vice cop and ended up in prison. With all of the reporters hounding her at every crime scene she decided the best thing to do was to resign from the LAPD Homicide Unit. But man does she miss it. Then, 6 months after leaving, the newspaper reports that a girl’s body is discovered and it may be connected to a serial killer cold case she was obsessed with. So, she goes to the crime scene to see what’s up and finds out that Sam Firecloud was called into the home by the owner because of unusual paranormal activity. Sam is a medium and he’s the real deal. In order to catch the Fairfax Stalker Lacey needs to convince Sam to work with her on it.

I had this book on my list for a while and finally decided to give it a go after going on a blogging break. This is an easy book to read. It flows smoothly and the pages turn themselves. Not literally. But I was done before I realized it. Lacey is a flawed character who tries to fix herself. She doesn’t usually wallow in her mistakes. Sam is a half-Navajo medium who keeps pretty much to himself. He doesn’t flash his gift around. He just wants to release spirits that are trapped and live his life. He’s not real excited about helping Lacey, but they end up making a terrific team. There’s not much gore to this. Bad things happen to girls in this book (revealed by the spirits), but it’s not front and center. I really like Sam and Lacey. The end up meshing really well together and I enjoy the writing and Lacey’s research so much I grabbed the next book in the series. And the next. And the next. Well, I binged, so that should tell you how much I enjoy these books. I highly recommend this cozy paranormal mystery.