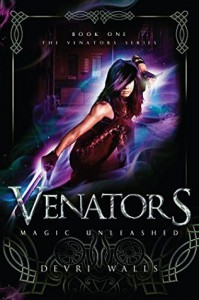 Rune Jenkins loves all things supernatural, but has to suppress her fascination around her twin, Ryker. For some reason he’s taken an extreme dislike of the things she likes and it’s exhausting hiding it from him. One person she knows embraces the supernatural though and Grey Malteer doesn’t seem to care that people think he’s weird. When creatures suddenly come hunting for them, Rune is in for a rude awakening. The things she’s been drawn to are not fantasy, they’re real and she, Ryker, and Grey are sucked up into their world. It’s not all fun and games in Eon. In fact, it’s not fun at all. It’s terrifying and Grey and Rune don’t know who to trust. But Rune knows this…she will do anything to rescue her twin from the crazy bitch (and Council of Eon enemy) who took him from Earth. This Zio chick better watch out. Because Rune is coming for Ryker whether he likes it or not. Family is family.

While I’m a little iffy on the whole Council reason for bringing the Venators back to Eon after so long, I do enjoy the action. The characters are complex and yet simplistic. Grey has had a shitty upbringing, but he’s a good person. Rune has had an uncomplicated upbringing and she’s reckless and, to be honest, an idiot. At least she has good instincts and hasn’t gotten Grey killed. Yet. Ryker is completely unlikeable at this point, but who knows what the future holds? Side characters are pretty awesome. I think I almost like them more than the main characters. I didn’t rate this higher simply for personal reasons. Or one reason. The Council. They seem so cliché and all this double (triple, quadruple?) secret dealing is something I really hate. I get it. They are immortal creatures who thrive on this devious shit, but I really truly hate it. What can I say? Not a fan. However, the story flows fairly smoothly with no overly explained scenes and the world is fascinating. I look forward to seeing where this is headed.