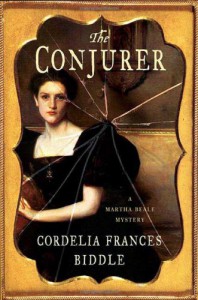 It’s winter in 1842 Philadelphia and Martha Beale’s father has disappeared, presumed dead, while out hunting. No body has been found and yet Martha still hopes he will show up. Since Martha doesn’t believe her father is dead she asks the mayor’s aide, Thomas Kelman, to help her find her him. In the meantime, there are several other storylines running alongside this one and they may or may not all be connected. I have no idea because I gave up at 59%. The writing is awkward and stilted. The separate stories don’t seem to have any connection to the disappearance of Lemuel Beale. And, quite frankly, I think it’s boring as all get out. I skipped to the end to see what happened to Martha’s asshole pops, and I was right in what I suspected. I will not give that away in case others want to give this book a whirl.