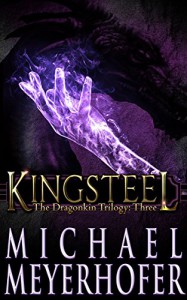 *Book source ~ ARC. My review is voluntary and honest.

Runn is in chaos with several kingdoms trying to claim dominion over the others. And in the midst of it all is an ordinary man thrown into an extraordinary situation and now in possession of a rare and powerful artifact, the sword known as Knightswrath. As rulers jockey for power, an ancient Dragonkin makes himself known for the first time in many centuries. He has hidden himself well and slowly built himself an army previously thought to be myth. He wants Runn for himself, but with others fighting for control there’s no guarantee he’ll win. Unless he can get his hands on Knightswrath. Everything will depend on Rowan Locke defeating Chorlga, but each time he uses the sword he loses more of himself. When the final battle is upon him, will he be enough to save all he holds dear?

The final installment of the Dragonkin Trilogy is full of action, battles, hardship and loss. But it’s also full of hope and the knowledge that when people come together they can do amazing things. The beginning of this tale picks up where Knightswrath left off. Before I go any further, this is not a standalone novel. Well, ok, maybe it could be? But seriously, don’t. Go back to book 1, Wytchfire and start from the beginning. This is epic fantasy people. You must start at the beginning to appreciate what comes after. And after is where this book shines. All the POVs are coming together, riding fast to the end. Omg, that end? I can’t say anything without giving away great stuff, so I’ll just say this: Read the whole trilogy! Also, could I please impale Crovis on a spike à la the Dhargothi? Pretty please?