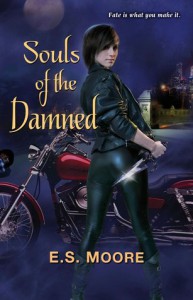 Kat Redding is a vampire who hunts down rogue bad supernatural beings. But she’s tired of it all. The death, the darkness, the claims so many have on her - she’s tired of being Lady Death. When an opportunity pops up for her to take out a rogue angel, she initially says no. But eventually she gives in because it’s the only way to advance the plot.

I’m so disappointed in this book. This series started out kickass with Kat as a great but flawed heroine and a cast of side characters worth noting. And then it deteriorated. This last book (that I can tell since there’s not another listed in the series) is completely ugh for me. Kat is whiny. So whiny. And mad all the time, taking it out on everyone and they put up with it. She hasn’t grown and neither have her companions. She does stupid shit when she should be smarter and balks at things she shouldn’t. This book ended with me sighing in relief that it was over instead of hoping that someday there would be more to Kat’s story. So much potential wasted. Oh, well.