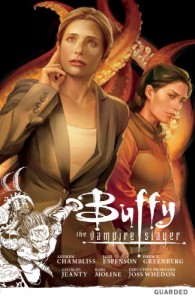 In a bold move to give disenfranchised Slayers a meaningful societal role (with pay), Kennedy recruits Buffy to act as bodyguard for high-profile clientele. But unlike the other recruits, Buffy struggles to abandon her Slaying instincts and looks for demony threats where none lie (much to Kennedy's dismay). So it's only natural that her first job is to protect a tech mogul who just so happens to be running from demon assassins! Collects Buffy Season 9 #11–#15.

This issue has two stories, Guarded and Billy the Vampire Slayer. In Guarded, Kennedy has gotten some the slayers jobs as bodyguards. I’d take a slayer bodyguard. They’re strong and fast, so as long as they know what the hell they’re doing I think that’s a great job for them now that magic is gone. Plus, it pays really well. The problem with Buffy is that she’s been a slayer for so long she can’t just let the instinct go. It’s hard for her to adjust. I was really hoping Eldre Koh would be a great addition to the Scoobies. I’m disappointed. Also, I like that the police are taking the zompires seriously. I like the way that development is heading.

Billy the Vampire Slayer is an interesting addition to Buffy’s world. I look forward to seeing where he and Devon are heading and if they stick around. And are they more people out there like Billy? Inquiring minds want to know.

As always, I love the artwork. Though that guy at the end of Billy’s story? Who the hell is that?! I have no clue. And that’s frustrating.