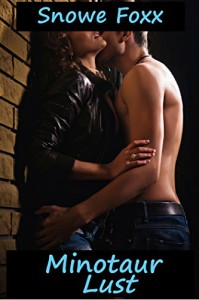 Athena is a female gladiator among a bunch of men and a Minotaur named Taurus. She dreams of winning her freedom and she secretly lusts after Taurus even though he’s a monster. When a fire sweeps the arena they escape to freedom, but will they act on their desires?

Incurring my wrath as these damn stories are wont to do, it starts at 14% and ends at 86%. Stop it! Also, this is a total cheat in the revered monster porn genre. Taurus starts out as a Minotaur and then after they escape, and Athena reveals she wants to screw him, he conveniently remembers a magical spell that makes him human. Only then does he fuck Athena with his gigundously huge cock. I feel betrayed in the worst way. I was looking forward to her riding the bull and instead I get mundane human sex. *sigh* On top of that, it also needs editing. What else is new?