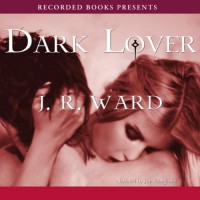 Darius has been keeping an eye on his half-breed daughter her whole life. Now that she’s getting ready to go through the change which most half-breeds don’t survive, he’s worried about her. Since they live in dangerous times he asks Wrath, the last pure bred vampire and their vampire king, to see to her if anything happens to him. Then he gets blown up by their enemies and Wrath feels he must honor Darius’s last request. Beth has no clue what she is and Wrath doesn’t want anything to do with her. Is this a match made in heaven? Maybe.

After having this series swooned over by many of my friends I expected to fall headlong for it. Unfortunately, I didn’t. What made it worse was the long boring parts that had me gnashing my teeth was exacerbated by listening to the audio and thus not able to skim over those parts. I think Beth is a moron and Wrath is unlikeable. I do enjoy the secondary characters, most especially Butch. He seems to be the most fleshed out character, but I could do without his dumbassedness around Marissa. Pu-lease! Check and see if you still have balls, Butch. Because I’m thinking you don’t. Fritz, the butler, is probably my favorite character. I love that guy.

The writing is unbelievably repetitive. Omfg, I think I got the point the first dozen times. Also, I was confused the entire book about who the fuck were vampires, lessers and whatnot. It is not explained well at all and I was constantly floundering.  Maybe if the author had spent more time detailing the history of these people instead of telling me a million fucking times how badass the brothers are then I might like it better. And can someone please tell me why Wrath is damn near totally blind and yet he can see juice dripping down Beth’s chin. And he can see emotions in eyes and a bunch of other shit that shouldn’t be possible. I call bullshit and I’m annoyed. Beth’s change is completely glossed over and the big fight in the end is not very fighty. It’s more limp dickish. Not impressed.

I give this a 3.5 because I do love the secondary guys and what little of the world I can figure out. When I cut out all the unnecessary shit it’s not too bad of a story. However, when I do continue on with the series, which I’m sure I’ll do some day, I’m going to read it so I’m not stuck listening to all the crap I could be skipping. Also, the narrator isn’t the best I’ve ever heard.