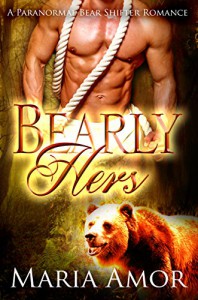 Curvy microbiologist, Gia Santos has a thing for shifters so she lets her friend Hope talk her into going to a shifter mixer. Maybe she’ll find a guy to date and her life will be a bit more exciting than it currently is. Trey Cross, ranch owner and bear shifter, had no intention of going to the shifter mixer until one of his clan tells him he was robbed by one of the women there. Now he needs to go and find this woman himself because no one messes with his clan. When Gia matches the woman’s description, Trey invites her to the ranch. He’s determined to catch her with her hand in the cookie jar, but he and his bear are falling fast for her. When primal instinct kicks in what’s a bear to do?

Mistaken identity alert! Trey’s not very bright. Instead of checking out all the women at the mixer he hones in on Gia and automatically assumes she’s the thief. You know, because there isn’t anyone else at the mixer who fits the description. Even though he spots a woman flirting with some guys, mistaking her for Gia and only realizing it’s not her when he notices the woman is wearing a different color dress. But she couldn’t possibly be the thief. Because then where does the plot go? *rolls eyes* That part irritated the fuck out of me. Come on! Anyway, the rest of the story isn’t bad and I do have a thing for bear shifters. It could have been a bit longer though. I’m talking about the story here, pervs. Also, the weirdo Mack is a bit much, but overall I enjoyed this read.