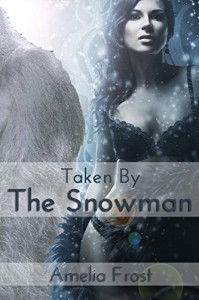 Recently single, Karen decides to spend Christmas alone in a secluded cabin. She’s stocked up on supplies, so the snowstorm that rages outside doesn’t bother her. Until she hears footsteps on the front porch and the door crashes open! She’s not prepared for the huge white-furred beast who enters. Alone and secluded, not very good things to be now. What will she do?!

What will she do? She dominates the huge beast, that’s what. Nom nom nom! And they have unprotected sex. Uh, oh. That can’t be good, but we’ll worry about the consequences later. Because monster sex! And lots of it! And for once the human is the one in charge. Yay! Nicely written even if it is short. I didn’t like the ending though. Where did the beast go? I was looking forward to more banging and more detailed domination. I’m sad.

Side note: I know the blurb for this on Goodreads and such says Karen submits to the Abominable Snowman, but that is not what I read. Except for when he first breaks in, she’s very much in charge. I want more stories like this.