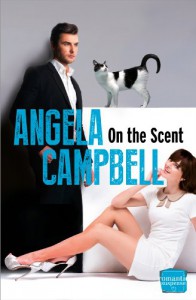 Hannah Dawson was a live-in home care nurse for Ellie Parham. When Ellie died she left Hannah her precious cat and dog, Abbott and Costello, and a surprising fortune of $10 million to take care of them. While the money definitely makes life easier, Hannah and the animals are now targets for every wack job trying to get an easy ride. When her house is broken into, even after she moved, she decides it’s time to hire protection.

Zachary Collins has his own security firm and it’s been years since he starred in the tv show The Psychic Detective. When Hannah walks into his office he already knows who she is and, as he reluctantly takes the contract to protect her and the boys, he hopes she never finds out how he secretly meddled in her life, changing the course of her future. But as the attempts to nab the boys escalate and he starts falling for her, he realizes he has to ‘fess up before she finds out on her own. As the pieces of Ellie’s puzzle fall into place, will Zach and Hannah’s puzzle fall apart?

This one kept me guessing only because not all the players showed up on page. Which was annoying. The mystery is decent, but it could use some work. Some foreshadowing of who all the suspects are would have been nice and by the conclusion there is a loose end that didn’t get tied up. In addition, there are a couple minor content errors that should have been caught in editing. Having said that, I will add that I did enjoy the story. It has sexual tension, humor, mystery, suspense and a dash of the paranormal. What’s not to like? The characters are decently written and I gotta say the cat and dog are my favorite. Their inner dialogue sounds just like what I’d expect. LOL There are two more books (so far) in this series and I will have no problem continuing on.