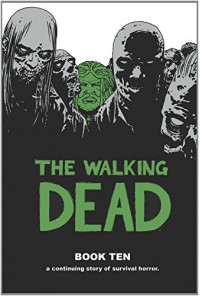 Rick's treaty with Negan and the Saviors is pushed to the limit, as both sides march toward ALL OUT WAR! Collects The Walking Dead #109-120.

Holy crap! The tension in this book frayed my nerves and kept me on the edge of my seat for nearly the entire read. Excellent build and kudos for the surprises allowing me to finally bump up my continuous 3 stars for books 1-9 to a solid 4 for this one. It’s war. How stupid to be at war with each other when resources are so thin including able bodied people, but hey, Negan’s a Class A asshole, so it’s either fight or submit to his domination. Yeah, submit to him? Rick’s so not going to do that and there are others who want out from under his thumb. So war it is. It’s dirty, it’s gory and it’s diabolical. But it’s not over by the end of this book. On to Book Eleven.