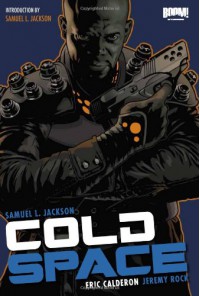 From Academy Award-nominee Samuel L. Jackson and Eric Calderon, the team that brought you the Emmy-award-winning, best-selling AFRO SAMURAI comes their next original series-COLD SPACE. When an on-the-run outlaw crash-lands on a hostile planet on the brink of civil war, he finds himself in the crossfire between two warring factions. But in chaos lies opportunity-because where there's money to be made. A hard-boiled sci-fi action-adventure with covers by Eisner Award-winning artist Dave Johnson and IRREDEEMABLE cover artist Jeffrey Spokes!

Not a terrible read, but it’s kinda clunky and has some plot holes. I like Mulberry though. He’s a badass. But Dee? What’s with the hooker gear? Pu-leaze! Now, let’s talk artwork. Excellent drawings and the dark colors fit the theme, but some of it is very hard to read. Talking bubbles are ok since they’re white with black lettering. But any kind of narration or “in the head” type of stuff had dark lettering and dark background. Not good. Next to impossible to read unless in bright light and thus it irritated the fuck outta me. All-in-all it could have been much better, but it’s a fast read, so give it a whirl.