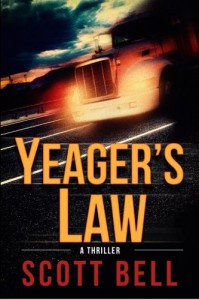 Abel Yeager lives by his own laws and his First Law is: come home at the end of the day. His laws served him well in the Marines, but he never thought he would have to apply them to his long-haul trucking job. One day while making a pit stop in an out-of-the-way rest area, he catches some thugs trying to steal his rig. He puts the hurt on three of them, but when their boss aims his gun at him, Abel thinks his luck has finally run completely out. Then Charlie Buchanan steps out of the restroom and trains her honking big gun on the bad guy. The boss gathers his beaten lackeys and hightails it down the highway. Bad guys: 0, good guys: 1. The police are called, reports are made, thanks are given and Abel and Charlie part, encounter over. Or is it?

Ooh-Rah! This is one of those books that sounds interesting and you think you’re in for a decent ride and it does start off that way. But then…Wham! The next thing you know you’ve been carjacked and kidnapped, traveling down a road at top speed heading into the night toward Whothefuckknowsville. Except, instead of being terrifying, it’s fucking awesome! Twists and turns and multiple players with their own POV and agenda with Abel and Charlie swimming in the dark with no idea how to answer the Who, What, Why and Where of it all. Does it sound like it should be a mishmash mess? It so isn’t. It all comes together with action, suspense, humor and a dash of romance. Yeager’s Law wins the Can’t Turn the Pages Fast Enough Award. I had to force myself to put it down when it came time to do Real Life things. Well-written with characters you’ll love or love to hate, a romance that’s sweet and steamy without being blatant, action reminiscent of Die Hard and suspense that will have you leaving half-moon marks on any available surface, I dare you to pick this one up. In fact, I double dog dare you. Author Scott Bell is officially on my Favorite Author List.