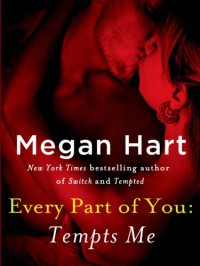 Simone Kahan and Elliott Anderson share an office building. Simone can see into Elliott’s office and she’s been watching him when he works and when he plays. He has no idea he has a naughty voyeur. In fact, they’ve never even met. Until one night they bump into each other in the elevator and, with a dare from her, he takes her to a party. Let the games begin.

Oooooh...this is a cheeky bit of tastiness with plenty of steaminess and humor to satisfy. Simone is sassy, smart, quick-witted and sexy. Elliott is sexy, but he seems very repressed. Simone is just what he needs, but he’s resisting for some reason. He apparently has issues but their exact nature aren’t revealed in the shortness of this story. From what I’ve gathered he likes sex rough but has been burned too many times in the past. He’s having a hard time believing Simone likes it rough. I think there may be more to it, but that’s the gist of what I’m picking up. I seriously need to continue with this story which looks to be more like a serial. There isn’t really a cliffhanger, per se, in this, but it does leave the door wide open for the next installment.