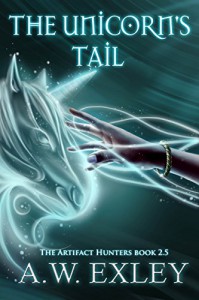 When Amy Hamilton ditches her scumbag fiancé, the London ton shuns her. Her! The good girl who has always done everything ever expected of a woman in the late 19th century. Humiliated and alone, she asks her best friend Cara to let her stay with her and her husband at their country estate. At least there she can be useful since the place is dreadful and in need of a complete overhaul. Once there though, the attention of two men confuse her. What could these men want with her?

I absolutely love the Artifact Hunter series and Jackson is a favorite character of mine. Amy is nice too, but thus far I haven’t seen a whole lot of her. In this story I get to know her a lot better and I have to say, she’s spunky and full of grit now that she’s letting her true self free. It’s a joy to watch her spread her wings. Loki is always fun to have around, but it was Jackson I wanted to see win the girl. The writing is superb. Even in a short story such as this there is enough info and development to keep it flowing smoothly without overwhelming it with unnecessary detail. While there isn’t as much steampunk to this story as the others, that’s not necessarily a bad thing. This is more a romance than an adventure like the main books in the series and it works quite well to fill in the gap for those of us chomping at the bit for more stories.