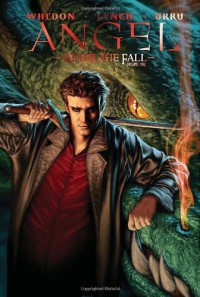 Taking place a few months or so (not real clear on the timeline) after the big battle in the alley, which is the result of Angel & Co. wiping out the Circle of the Black Thorn, this story catches me up on what happened and where everyone is now. Soon into the battle Wolfram & Hart sends Los Angeles to hell and it’s a right mess. The aftermath is a battle all in itself as Angel and Co. try to save the citizens of LA, but they’re each working basically on their own. No united front. Yet.

First off I have to mention how visually appealing this graphic novel is. The characters look like who they should and the colors just pop. Beautiful! Now, the story…it’s pretty good. I enjoyed seeing what everyone is up to, especially Spike because he’s my favorite. Sorry, Angel. You’re an ok dude, but Spike…mmmmmm. Hate Gunn. Seriously. I never truly liked him in the series and while I didn’t hate him or wish him dead or anything, now I want him to die. Not die as in vampire dead. I mean, die for good. And I’m sorry for the Fred fans out there, but I love Illyria so much better. Fred was an ok character on the show. Way underdeveloped in my opinion, but she could also be too annoying. Illyria is so very interesting. Lorne is also a character I wish would have had more airtime, but at least he’s in the graphic novel. There are some questions left unanswered by the end (especially about Angel) and the ending itself?! Yikes! Cliffhanger alert! Thankfully I have the next few books, so I’m not hanging for long.