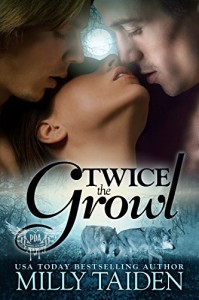 Talia “Tally” Barca has to go to a family wedding and she doesn’t want to because her jerk ex husband will be there. Her cousin Nita suggests hiring a sexy escort, but Tally’s not so sure that’s a good idea. Still, she decides to run the idea past her neighbor who happens to run a paranormal dating service. When Gerri sets her up with not one, but two super hotties, Tally is shocked. And intrigued. Monogamous relationships are hard enough for her to make work, so how much harder, and potentially disastrous, would a poly relationship be?

Oh, my! This short story is delicious! The world could use more building, but the characters more than make up for that shortcoming. Connor and Theron are nommylicious! Tally is a tad annoying at times. She says she’s ok with who she is and how she looks yet she can’t believe that two hotties want her even when they make it extremely plain that they do. Come on! They treat her like a queen and she’s still unconvinced? I just wanted to smack her. But other than that and one detail at the end (regarding the werewolf part) I love this story and would read more by this new-to-me author.