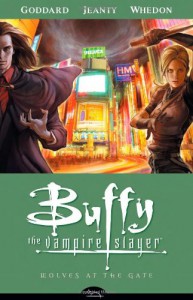 When some Japanese vampires attack the slayer stronghold in Scotland using some funky tricks that vamps aren’t supposed to be able to do and steal Buffy’s scythe, she sends Xander to go pump Dracula for information. Since Drac is the only other vampire they know who can transform into animals and fog they’re hoping that not only can he help, but that he will.

Ok, first off, the illustrations don’t seem to be very consistent. Sometimes the characters are recognizable and sometimes they aren’t. Not sure what’s up with that. Other than that irritating factor I do love the artwork. As for the plot, who doesn’t love when Dracula gets worked into the story? But Xander spending time with him after Anya’s death? Seriously? A bit farfetched if you ask me, but I’ll work with it if it means they have an in with Dracula. The story is tight and focused mostly on these Japanese vamps. There is a side story about Buffy and Satsu that I find nigh impossible to believe considering everything I’ve seen about Buffy in the past, so I call foul on that. And finally, Buffy has a short meeting with Twilight and he kicks her ass, but lets her live. Hmmmm…anyway, all things considered this is my favorite story so far in Season 8. I hope to see more of Dracula in the future. He’s a bit of an asshat, but not so bad I wouldn’t enjoy seeing him again. And again. Just sayin’.