WoWwA ~ Our love is strong with this one 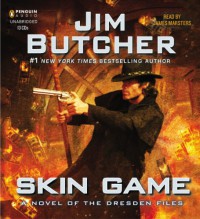 Harry Dresden, smartass, wizard, former private investigator and current Winter Knight to Mab, the Queen of Air and Darkness has been living out on Demonreach for nigh on a year when Mab suddenly has a job for him. Well, job implies he has the option to refuse and that is so not the case when it comes to Mab. In order to pay off a debt to Nicodemus Archleone, Evil Denarian Extraordinaire, she has loaned her Winter Knight to him for a bank heist. Not just any ol’ bank heist though. Oh, no. Nicodemus intends to rob the vault of Hades. Not only does Harry have to work with an entity he hates with every fiber of his being, but he has to play nice with the rest of the team and hope no one literally stabs him in the back all while robbing the God of the Underworld of one of his most precious treasures, the Holy Grail. No, not a figurative one, the literal one. Harry is so screwed.

It’s unanimous…this book has been deemed awesome. Plot, mystery, twists & turns, humor and characters kept us entertained and the narration was spot on. Each time we thought Harry was going to go toes up, something would happen to save the moment. And then there was the big finale. Holy shit! We so did not see that coming. Actually, there were many moments like that, but that big one near the end was a doozy. Butcher is one diabolical mofo.

While everyone was glad to see Michael back in a big way in this installment, A was particularly happy. She loves Michael. And Mouse, too. T wasn’t happy with the way Butters was acting, but we agree that we think he’ll be better after this book. As usual, T & K love the magic use and the battles. I enjoyed it all and the Xanth reference made me giggle. Other favorite characters are back, some more than others, and a few new ones are introduced. There’s a few new villains introduced as well as two new characters that I hope we see again. And even though Harry told Binder he would kill him if he set foot in Chicago again (Turn Coat), he was forced to work with him. We actually like Binder. It would be nice to see him in future books, preferably on Harry’s side.

So many great quotes in this one it was hard to whittle them down. So I leave you with four funny ones and two inspirational ones.

“Did you shout 'Parkour'?" Michael asked.

Michael fought to keep a smile off his face. "Harry," he said, "I'm almost certain one does not shout 'Parkour.' I believe one is supposed to simply do Parkour."

"Do I criticize your Latin battle cries? No, never once.”

“Nice try?” Butters said. “Mister, where I come from, there is no try.”

“The Blue Beetle was not a clown car," I said severely. "It was a machine of justice.”

“But they were doughnuts of darkness. Evil, damned doughnuts, tainted by the spawn of darkness . . . . . . which could obviously be redeemed only by passing through the fiery, cleansing inferno of a wizardly digestive tract.”

“Because . . . fear is a terrible, insidious thing, Waldo. It taints and stains everything it touches. If you let fear start driving some of your decisions, sooner or later, it will drive them all.”

“Hope lets you do things you would otherwise never be able to do, gives strength when everything is darkest.”