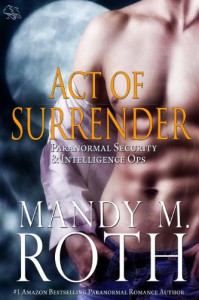 After dropping off the radar for 10 years, Dr. James Hagen is back in the PSI fold. His stint as a captive of The Corporation and his year of torture have royally screwed him up to the point he’s not sure he’ll ever be a productive member of the team again. Until he has a vision about a girl. When he makes contact online with a person of interest to the team and he meets up with her in person he realizes the two woman are one and the same. Not only does PSI need to know what she knows about The Corporation and which side she’s on, but James needs her more. With The Corporation breathing down their necks, can either of them survive long enough to have a shot at forever?

Can I sum up my review by saying: “Yes! This!” No? You need more? *whines* But whyyyy? Ok, ok. I haven’t read the first series, Immortal Ops, in this world. I’ve only read the first spin-off, Act of Mercy and loved it! It’s my new favorite go to series when I want a hearty laugh as well as some steamy sexiness. Nom nom! The plot is decent and the writing is lovely, but it’s the characters and humor that really sell it to me. I do love humor in my books. I don’t care if a story is a grim suspense/thriller/mystery I need some humor to balance things out. And humor is delivered here in spades. I very much look forward to going back to the beginning and starting with the Immortal Ops series. I do so enjoy when there are multiple books already out when I discover a series I love. *insert evil laugh and hand rubbing*