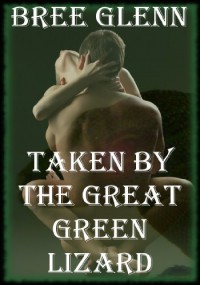 Lara lives in dystopian Earth. An alien invasion has screwed Earth up but good, but it’s been a few centuries and things are settling down a bit. Lara is a forager. One day while on walkabout she finds a previously undiscovered orchard and a stream with fish in it. She’s so happy thinking about the bounty she’ll be able to bring back to her people that she’s startled when a creature walks out of the forest. They’ve been taught to run when seeing the monsters that were genetically engineered by the aliens, but something about this green bastard intrigues Lara. Nonetheless she’s relieved when it disappears and she can hightail it back to her village. But she can’t stop thinking about the lizard with the human eyes.

So, this dystopian world is depressing. Aliens and their genetically engineered monsters, even dinosaurs? No thanks. I’m skeptical about this orchard and stream. I mean, come on. No one has discovered it in all their forays? A little far fetched. But then there’s this green lizard that is very human-like. When Lara goes back to her village and has sex with Talin, a much sought after forager, it’s like she’s channeling the lizard. I was very confused by the whole sex scene. What the hell was going on? I was left scratching my head and thinking I’d been cheated out of some monster porn. There was no real lizard peen. That’s wrong. So wrong.