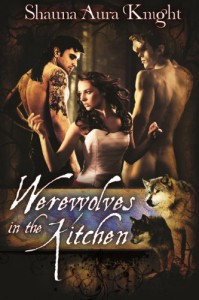 When Ellie was fired for complaining about her boss’s sexual harassment, she grabbed at a job offer at SpiralStone retreat. One day she would finish her degree in physics, but for now she was enjoying the simplistic lifestyle. Well, she was enjoying everything except not having any sex. There were two really hot guys who worked in the kitchen, but hot guys never went for her geeky self, so she drooled over them in her private fantasies. Until the day when fantasy becomes reality. Now they’re in a pickle and Ellie’s trying to think her way through it instead of leading with her heart. Will her heart overcome her brain in time to save them all?

I enjoyed the alternating POVs in this hot short story. Ellie is drooling over Kyle and Jake and Kyle and Jake are drooling over Ellie and none of them really have a clue that they all want the same thing. Well, Jake and Kyle know because they talk about it, but Ellie is clueless about them and they don’t want to scare her away. To make matters even more complicated the guys are werewolves and that’s where the major problem comes in after they hook up with Ellie. I loved Jake and Kyle, but Ellie irritated me with her waffling and over thinking. Yes, she’s a physics major and she’s all Spock Logical and shit, but come on! She completely ignores what her body is telling her not to mention sticking her fingers in her ears and saying la-la-la to her heart. Anyway…this is a hot story with m/f/m ménage action, but only implied m/m/f action. I’d be interested in reading more about the world in this book. Shifters and magic are things I love as well as steamy bits and humor.