I wanted to love it, but it wasn't meant to be 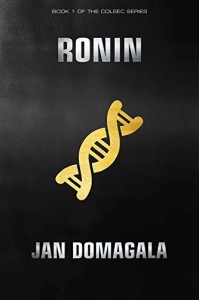 It’s the 25th century and Kurt Stryder is a Captain in Recon Delta, the special forces of Colonial Security or Col Sec. He and three other men have volunteered for a project that in the right hands could help many people, but in the wrong hands could be used as a devastating weapon. When Kurt is the only survivor of the experiment the project is abandoned. However, he didn’t just survive. His transformation was a success. Now he’s fighting to stay out of enemy hands as well as prevent his life from being hijacked by his own government. Who will win the battle?

The premise behind this book was a darn good one. Who doesn’t like a good futuristic yarn about super soldiers? Unfortunately, this one failed to wow me. The plot is excellent, but the characters could use more definition. They seemed a bit two-dimensional. Plus, Kurt is too much of a badass. Someone who is nearly indestructible and strikes fear into the hearts of everyone is not cool, it’s boring. Remember what Qui-Gon Jinn said in Phantom Menace? “There’s always a bigger fish.” Believe me when I say, unless the character is named Q, I do not want to read about an omnipotent person. Yes, I just referenced Star Wars *and* Star Trek. I happen to love both. Get over it.

In addition, the writing is mediocre. Over explaining is a constant, certain sentences appear to be favorites as they are repeated frequently and dialogue is stilted. There are also passages that are awkwardly worded and there are a few plot points that make no sense. Since this story revolves around the military, I have to mention that the portrayal of how the military is run is unrealistic even if it is futuristic. I had a hard time with the way the soldiers talked (there’s those dialogue issues again) and no matter how fictional, I just can’t accept a Marine as a marine or being called a soldier. As a wife and mother to Marines I just can’t acknowledge that. It’s a personal thing.

Finally, for all that’s holy (mainly chocolate, tea and books), both cases of insta-love needs to be dropped. Seriously. They are not only ridiculous in the extreme, but I rolled my eyes so hard at them both that I hurt myself. There was zero build up for any kind of romance and it felt as if they were shoehorned in to add a romantic element. No. Just, no.