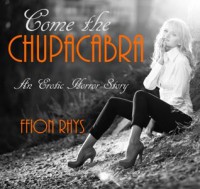 Bree’s best friend Misha needed a tenth student to make the anthropology field trip a possibility. A week in the wilds of the hot and humid Yucatan looking for the mysterious pack of Chupacabra wasn’t her idea of fun, but for Misha she’d do just about anything, so she agreed to go. Typical of just about any group there are asshats and non-asshats. One can only hope the Chupacabra are real and the asshats end up à la Friday the 13th.

Put hot college students together and what do you get? Bickering and sex. Add in some mystical monsters and what do you get? Mayhem and monster sex. This story is fairly well-written. It could use a final polish since there are some awkwardly worded sentences, but overall it’s pretty good. It’s got a bit of Friday the 13th seasoned with monster movie horror followed by lots and lots of sex. The sex scenes aren’t as detailed as they could be, but still hot. And yay for Chupacabra sex! These poor guys are so horny and they really don’t live up to the fearsome reputation that precedes them. I like the idea that the monster is supposed to be evil and foul, but is actually quite gentle. I hope there will be more coming. Um, stories. Stories coming.