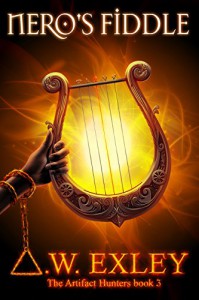 Spontaneous human combustion is so rare it’s not even considered as an option even when a person has obviously burned to death. Until Inspector Fraser is called in on one that fits the profile where the body has burned to ash and yet the surroundings have not. However, one death, two deaths, three deaths, oh, boy…this is stretching the bounds of believability by quite a bit.

Cara and Nate are settling into married life and the Queen’s new position for them as Artifact Hunters quite nicely. And then Inspector Fraser comes along asking for Cara’s help in solving these strange deaths, deaths he believes are murders. Fraser and Nate’s hatred for each other will not stop Cara from finding Nero’s Fiddle which she believes is the instrument of the deaths. Follow the fiddle, find the killer, hopefully before there’s a victim #4.

Oh, sweet, sweet steampunk! I love this series! Murder, mystery, intrigue, humor, romance, steaminess (without being graphic), mythology, fantasy and spine tingling creepiness, I love it all. This story picks up not long after Hatshepsut’s Collar and the layers keep on building. Told from several POVs, I learned more about Fraser and his reason for hating Nate and when Cara visits with Nan I learned more about her mom & dad. Then Nan gets her own POV and I learned a lot about her and Nessy’s younger life and got to meet Cara’s grandfather, Gideon. The mystery surrounding the murders is sufficiently twisty to have kept me guessing and that ending? Wowzers. Secrets are tricksy things. Oh, must not forget the Curator. Holy shit! That guy is totally creeptastic, so, of course, I can’t wait to see more of him in the next book. And Cara gets a new bodyguard, Brick, who is quite the character and a new friend, Skittles, the famous courtesan. Jackson, Amy and Loki don’t get a lot of page time, but what they get is memorable and there are appearances by Helene and Malachi, the bookseller.

I am totally looking forward to Moseh’s Staff though the blurb fills me with dread. *shudders*