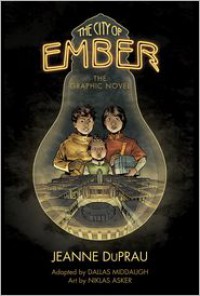 The Builders created the city of Ember long ago. The only light is what is produced by the water running underneath the city, but the electricity is beginning to fail no matter how many times repairs are made. In addition, the city is running out of food stores and the government is corrupt. Two children, Lina and Doon, discover a way out of the city, but will the citizens believe them? Unfortunately, they have to flee before they’ve told anyone about the potential way out. Have they jumped from the frying pan into the fire? Or is there really a better place than Ember?

I haven’t read the books though they are on my TBR since my daughter enjoyed The City of Ember. In fact, I picked up this graphic novel because she did enjoy it and after she read it I thought, what the heck and picked it up.

It was a quick read as most graphic novels are and I really liked the artwork. The story gives me a pretty good idea of what the novel is about and I’ll still read it (eventually lol) because there is no way for a graphic novel to tell the whole deal. All-in-all a very enjoyable read.