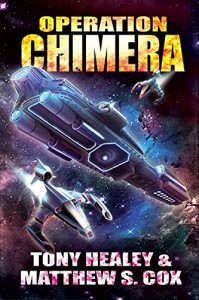 The Terran Union’s newest, biggest, baddest ship, the Manhattan, is going to the Chimera Nebula on its maiden voyage. The war with the Draxx is not going well and have left the Union with little choice but to do the unexpected. So exploring the Nebula and what the Draxx are doing in there has become top priority. Can they overcome the Nebula’s effects, will they surprise their enemy, have they confused the spies, but most importantly…will the Manhattan and her crew survive?

The authors have penned a well-written sci-fi tale that builds the tension quite nicely. The launch of the Manhattan and her covert mission are nearly a Hail Mary play by the Union. They are losing the war with the Draxx and it’s time to change tactics. Unfortunately, spies are everywhere and the Manhattan is no different. Told from several POVs, I got a real feel for who these characters are. The writing is descriptive without being boring and the action is nearly non-stop. My only complaint is the battle scenes. They seemed to run together for me and it was a bit hard to picture without overlaying Star Wars scenes in my head. It is sci-fi though and I know that genre isn't my strongest one to visualize, so I don’t fault the authors, but my own comprehension. Still, I grade by how much I enjoy a book and while I did love it overall, the scenes in the fighters were a tad tedious for me. However, Keg is my favorite character. How could he not be though I’m wondering about such an unconventional droid serving a fighter especially during a battle. I was reminded of the scene in Monty Python and the Holy Grail where King Arthur and his Knights meet Tim the Enchanter. After Tim gives this long speech Arthur turns to his Knights and says, “What an eccentric performance.” Ha! That’s exactly how I feel about Keg. He’s awesome. I will say the ending got me. I had a WTF moment. I never in a million years saw that coming and I can’t wait to see how the rest of this series plays out.

All-in-all this is a great start to what looks to be an epic sci-fi adventure.