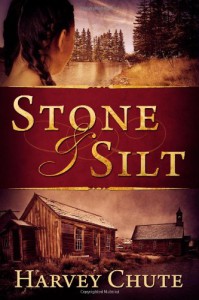 Nikaia Wales is a 16-yr-old girl living in the 1860s during the gold rush of British Columbia. She is half white and half native Indian and it’s not easy growing up a ‘mixed breed.’ But she has her family and her friends. Especially her friend next door, the quiet Chinese boy Yee Sim. She and Yee Sim go off into the woods every chance they get to play the Hunt game. That’s where Nikaia tracks animals and shows Yee Sim how to do the same. But one day when out tracking they find a satchel of gold nuggets and Nikaia overhears a disturbing conversation between two men about it. When one of the men comes up dead and her father is accused of the murder, Nikaia needs to do everything she can to clear her father’s name.  Though he doesn’t blame her for the ensuing problems, Nikaia feels it’s all her fault because he would never have been accused if she hadn’t been getting into Mischief, if she had stayed where she was supposed to be. With the judge soon to arrive on the sternwheel, time is running out. Nikaia needs to solve the mystery before it’s too late.

I’ve always been up front about how I dislike the subject of History. Put a History book in front of me and I’m bored out of my skull. However, you wrap History up in an excellently told fictional tale and I’m enthralled. This book has a lot of history about the Gold Rush, how people lived in the 1860s, British Columbia and different cultures. Was I enthralled? Hell, yes! Why? Because it has what I so need to make History an exciting and readable subject, historical facts weaved expertly into a fictional tale.

The beginning was a little bit slow (though still fascinating) as I learned about Nikaia and her family (dad, mom, 14-yr-old sister Klima) and her day-to-day life, but as soon as she and Yee Sim stumbled across the gold it picked right up and galloped to the end. All-in-all an excellent YA Historical Mystery.